Staff Spotlight: Christian Baur, A Master of Kelowna Woodworking in the Making 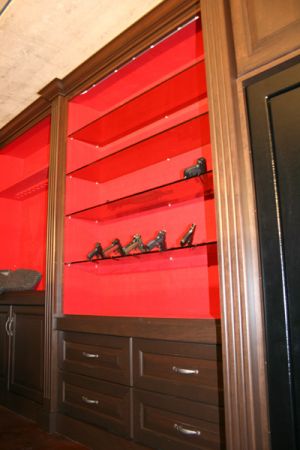 When Christian Baur looks back on his 30 years of fine woodworking in Kelowna, the Kootenays, and Germany, it’s easy for him to recall the custom millwork projects that stand out the most.

Two of them he helped create after joining Heartland Millworks five years ago.

“There was ‘the Bre-X house,’” Christian recalls, referring to the Kelowna property the locals remember because it was purchased by a Bre-X investor. When the company’s stocks sunk, the half-built mansion sold to someone who invested in custom millwork throughout the house. “I really loved that one.”

Christian began his career in woodworking as a teenager in Germany where he began his apprenticeship after a work term in a cabinet shop.

“I just liked it, so I’ve done it ever since then,” says Baur, who immigrated to Canada in 1985 and brought his European craftsmanship to the Kootenays. “You have to like what you do.  I like it and am good at it, so why wouldn’t I continue?”

Here in Canada, Christian says that millworkers sometimes get less respect even though it takes almost half a lifetime to become a master craftsman.

After three decades of building cabinets and furniture, Christian is enjoying his post at Heartland because his heart and his hands appreciate the high end custom woodwork in Kelowna.

“I don’t like banging boxes together. I like the fancy stuff liked curved doors and custom mouldings.”

Perhaps the most creative custom project he’s ever been a part of was the gun room Heartland just built for a trapper in northern Alberta. The three 14-feet tall walls are covered in custom cabinets for the client’s 75 rifles and 60 handguns.

“That was quite something,” says Christian. “I’ve never done anything like it.”